Happy book anniversary to me!

Nudged by my Facebook timeline, I realise it’s a year since I relaunched my Newcastle-set romcom, The Bridesmaid Blues. It’s a story that’s very close to my heart, not least because the heroine bears plenty of similarities to me, at various times of my life: I’ve been lonely, unhappy and stuck in a job that’s going nowhere. Hell, the book’s central plot – where heroine Luce has to be bridesmaid at a wedding where the ex who dumped her is best man – was literally something that happened to me!

So I’ve always been slightly disappointed that the book never did quite as well as I wanted it to. Most people who read it seemed to really love it – hell, I even got a cover quote from award-winning author Caroline Green – but it never found the traction I think it deserved. 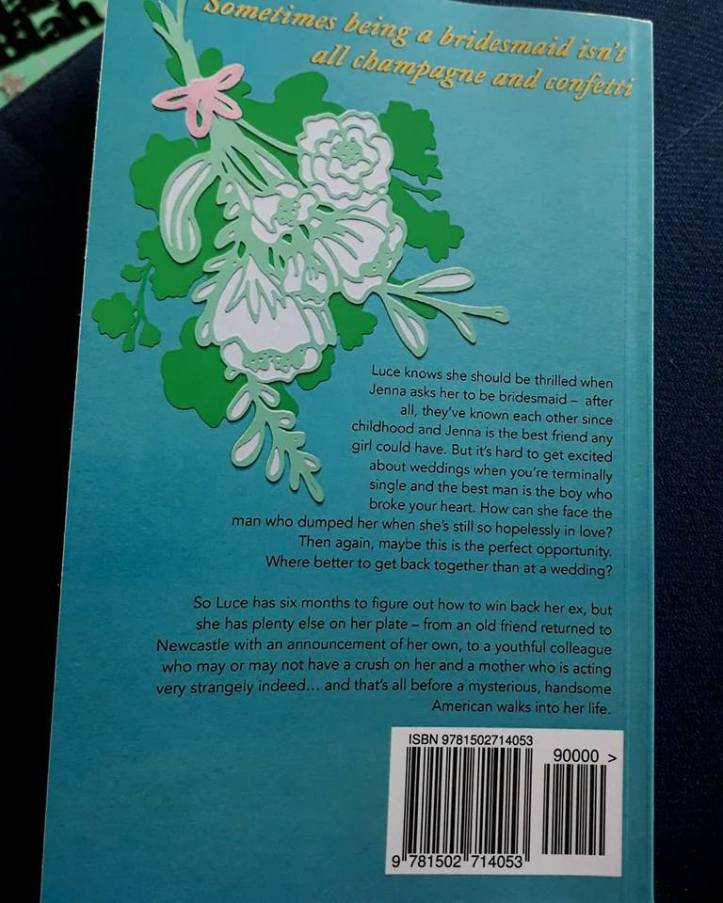 In part, this was because launching the book was a bit of a steep learning curve for me. The initial cover was pretty, but it was designed when both me and my designer Caroline Goldsmith were starting out on our freelancing journeys, so both just feeling our way. I’d made some useful contacts in the blogging world, but mostly they were bloggers who focused on paranormal and urban fantasy, who’d liked my book Dark Dates. So while I managed to sell some copies and get some nice reviews, I felt stalled.

Last year, then, I decided to be proactive. I contacted Newcastle-based designer Britt Coxon, whose work I have long admired (she created a Wonder Woman card for me a while back, which my friends loved, and I own a couple of her pictures). She agreed to do a new design for me, delivering a beautiful paper cut cover that was simple and striking and captured the lighter, contemporary tone of the novel – while also looking gloriously almost like 3D.

Caroline Green had gone from being an award-winning children’s author to Cass Green, best-selling thriller writer, and was gracious enough to let me still use her quote, changed to reflect her status. The other Caroline helped me create a new cover and update the internal contents, and I relaunched the book with the help of book blogging maven Anne Cater, who I had met briefly then connected with through the Book Connectors Facebook page, and whose Random Things company organised a blog tour for the book.

Did I suddenly become an overnight best-seller? Alas, no. But I got a slew of great reviews, some increased sales, and I felt I reached a new audience with a book that I feared had run out of steam. (I was particularly proud that I gained new fans in the US – where I introduced a reader to the meaning of the word Geordie, so I can die happy – and, slightly randomly, Nigeria, where a book blogger pronounced Luce one of her heroines of the year!) Best of all, several of my family – who never read my stuff – actually read it, and loved it (one then went on to read the whole Dark Dates series – in just over a week!) and it’s nice that after all this time, they have a bit more understanding of what I do.

Of course the one thing I hadn’t anticipated was that my life would become even more like Luce’s – that, like my heroine, I would tire of life down south and find myself back home, for many of the same reasons she did. Did revisiting Luce and her life here make me miss the things I’d left behind? Or was it just a coincidence, a quirk of timing? Or maybe a pinch of both.

One thing’s for certain: moving back to Newcastle has made me love the book even more. Yes, I recognise Luce can be frustrating and annoying (as… um, so can I?), but I’ve always been more drawn to flawed people, and writing someone working through and owning up to her fears and insecurities – and still getting her happily ever after – made me think maybe I could too. And if I do so back in the city I can’t but adore – well, so much the better.

Some of the lovely praise I received (bold mine, for bragging purposes):

“After a couple of pages, I knew that Bridesmaid Blues was one of the funniest books I would ever read. I was laughing 98.9% of the time… here are the reasons why Luce totally rocks. a). She’s funny. Sorry, huge understatement. She’s downright so-funny-I-laughed-so-hard-while-reading-this-book-thereby-earning-me-looks-that-were-laden-with-concerns-about-my-sanity-from-strangers funny” – Up Close and Literal

“I absolutely adored it.  A perfect read for fans of Bridget Jones and Lindsey Kelk.  A smart, sassy, funny romcom with lots of northern charm.” – Kraftireader

“a quick and fantastic read that leaves you feeling good and optimistic about love and finding Mr. Right. Tracey Sinclair’s writing flows perfectly”

“I’ve read so many wedding, wedding planning or proposal books lately that I did not expect to enjoy this novel as much as I did. “The Bridesmaid Blues” completely surprised me with the light, romantic comedy and the great characters.”

“An absolute must read, it made me laugh and I would have no problem in reading it again!” – Lacy Ace

Wanna see what the fuss is about? You can buy it here.