The Suggestibles at the Stand and Newcastle Improv Festival

I must admit my experience of improv begins and ends with Whose Line Is it Anyway, a series I used to watch faithfully, and which now has a second life as a bunch of Tumblr memes that regularly pop up on my dash to remind me of simpler times. So when a friend suggested I check out local improv group The Suggestibles, the driving force behind Newcastle’s upcoming Improv Festival, I decided a trip to the past was overdue. 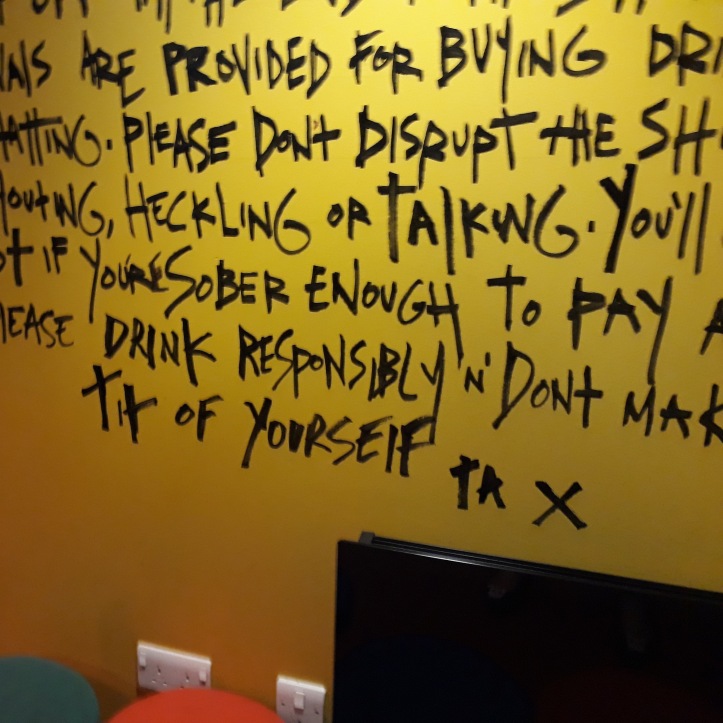 Comedy venue The Stand on High Bridge Street has been on my list of venues to check out since I moved back to Newcastle. It looks small from the street – like a nice but fairly narrow bar – but there’s a pleasant and fairly large beer garden out back and the venue itself in the basement is nicely laid out and a decent size, with plenty of toilets and clearly visible fire exits (I am of an age when both of those things matter to me: never a fan of subterranean spaces, I always like to see clear paths of egress.) It also does a good range of food, including veggie options, though my friend and I stuck just to wine.

Its no-nonsense approach is spelled out in signs that adorn the walls telling you ‘nee chatting’ during the show, ‘don’t make a tit of yourself’ – and, slightly weirdly, warning you not to move the furniture – a request that was verbally repeated when I collected my tickets. When I asked the very nice young woman on the door if that was a problem they encountered so often that they had to tell people not to do it in advance, she gave a slightly weary sigh and said ‘more than you’d think’. Um… OK. 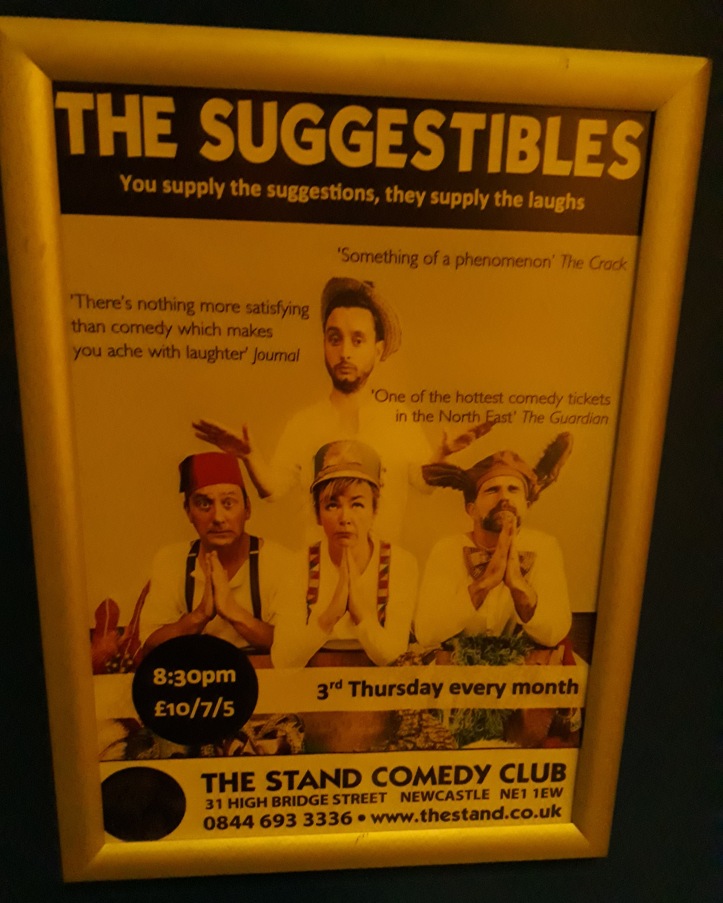 The show itself, which remained untroubled by errant furniture rearranging, was a riot. As someone prone to social awkwardness and stumbling over my words even in the calmest of situations, I can only marvel at the skill that it takes to think that quickly on your feet, and be funny with it. The Suggestibles have been around a long time and it shows in their slick performances and easy chemistry (two of the group are, indeed, married). 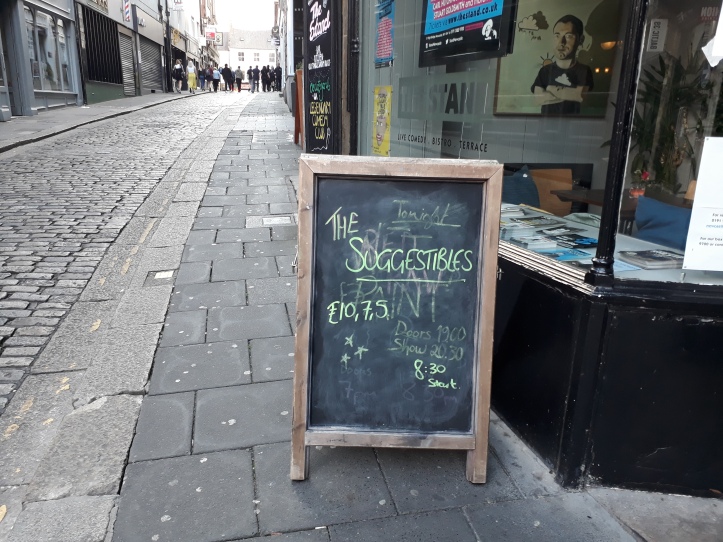 Not everything worked, though in fairness the flaws were mainly of the form, not the performers. Some of the sketches could have ended a little sooner, and though any improv group is at the mercy of its audience, I felt like they should have pushed back a little harder on some of the less appropriate shout outs: a deftly done sketch on accents went from skillful to sour once the Jamaican and Indian accents came out. (It’s 2019, folks: pretty sure it’s not OK for a bunch of white people to put on Jamaican and Indian accents for a room full of other white people, no matter how innocent the intention behind it.) But mostly they handled the crowd with aplomb, even managing to gently tell someone off for checking their phone without being too mean about it (that, uh, was me – the SHAME. I’m sorry, guys, but it’s been a long week and my mind wandered back to work for a moment and I promise I won’t ever do it again.)

But overall, it was an incredibly sharp and funny performance by a tightly-meshed group of genuinely talented people, and I was really pleased I made time to see the show.

Newcastle Improv Festival runs from Saturday 27th July to Sunday 4th August at venues across the city including The Stand, The Cumberland Arms, children’s storytelling centre Seven Stories, Jurys Inn and my old fave, Alphabetti. You can check out the calendar and buy tickets here.