In which I go to Lisbon and drink gin

I’ve been thinking a lot about serendipity lately, and how often it seems to turn up in my life – and also how it’s not a passive thing: when those chances come, gotta grab ‘em. This weekend was a happy example of this: my friend L from New York messaged me a while back to say she would be in Lisbon for a few days to start a big European trip, and it turned out that my friend S would also be there (this is less exceptional: his partner lives there!) So I thought this happy coincidence would be a great excuse to visit a city I’ve never been to, meet S’s partner, and catch up with L, who I haven’t seen since I was last in New York a few years ago.

It was also an exercise in trying several new things. It’s a new city to me, and we were staying in an Airbnb, which is also new for me (luckily L booked it, since I couldn’t figure out the map and we would likely have ended up in the burbs, or the sketchiest part of town. It was also the first time I’ve flown out of Newcastle, which was a mixed experience: having to change in London was a pain (I spent a lot of time in airports), but it was also delightfully easy to get to and home from: you can’t beat getting off a plane and being home in half an hour!

[This cafe is apparently a big tourist destination: it was, accordingly, far too busy for us to go in].

Lisbon itself is a delight. I got in Friday evening and S and his partner kindly picked me up from the airport, which was my introduction to Lisbon traffic jams, and we had a quick drink in the square near where we were staying in Bairro Alto*– which was before they had to dash off for childcare duties – so L and I just had a late supper and some wine in our attic apartment, which was a slightly sparse but very serviceable space up that more than suited our needs, even if the combo of insanely steep stairs and low eaves made me constantly fear I was going to either tumble to my death or bash my head in on the ceiling.

Still, it was good to get used to steep early on, as I discovered that’s the one thing Lisbon has in spades. Saturday L&I had a leisurely wander up and down literally miles of steep, cobbled pavements, which made me REALLY wish I had broken in the shoes I bought specifically for this holiday, which of course I didn’t so was back in punishingly thin-soled ballet pumps, which meant that by the end of the day my poor feet were throbbing, and I was hobbling along moaning about 10 feet behind the more sensibly-shod L.

Lisbon is a perfect city to walk around, though. Neither of us had much of a set agenda, so we were happy to go wherever the day took us, enjoying the city’s picturesque combination of old and new, historic and funky.

We’d agreed to meet S and his partner J for coffee or drinks in the afternoon, in one of the places S recommended to me – the amazing Exbaixada. This ‘concept shopping gallery is based in an old embassy (hence the name) and has retained much of the gorgeous décor. Filled with a smattering of super cool shops (many of which focus on eco or sustainable toiletries or fashion), it also houses Gin Lovers, a stunning looking cocktail bar and restaurant where we just had to stop for a drink. Well, it was very hot outside – it would be rude not to. In fact, it was rude to just stop at one…

Not a terrible place to have a drink, right? 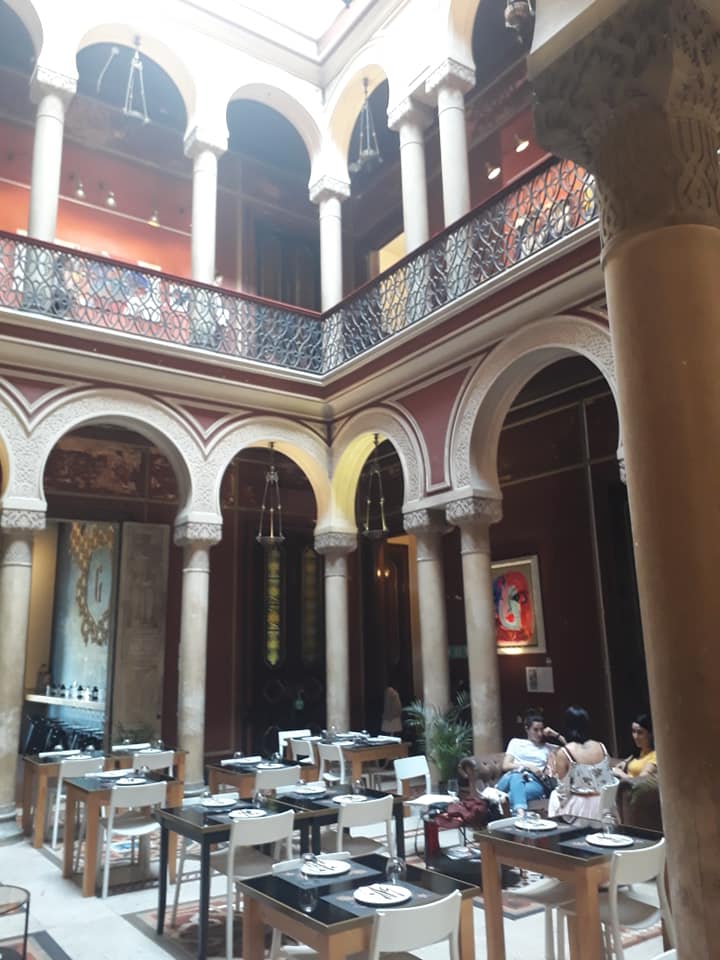 *Take all locations with a pinch of salt. I am terrible at geography and street names.