The Ship Inn and Gangstagrass at the Cluny

I seem to split my time fairly evenly these days between the Quayside (Live Theatre) and Ouseburn – and, following Friday’s snowy visit, I returned in mercifully better climes for a gig at the Cluny to see Gangstagrass.

I was going with my friend L of Raven in a Graveyard – and her parents, who are an absolute delight, and way hipper than I will ever be. It’s not often you see a couple of pensioners getting down to a mix of bluegrass and hip hop – not in my life, anyway – but her folks were long time fans, having seen the band in Edinburgh and the US. (They were chatting away like old friends before the gig – I was impressed!).

Dinner first, and we decided to try The Ship, in no small part because of its proximity to the venue. But it’s a place I have been keen to try for ages, but have so far only managed to walk past when it’s stowed. It’s is an old-fashioned pub – dog friendly, good beer, some board games – but has also successfully established itself as a venue for vegan food. I had the ‘fish’ and chips with mushy peas, which was filling, but not amazing: the chips were great, but the ‘fish’ – tofu wrapped in seaweed and then fried in batter – was a little bland, and the peas looked processed rather than marrowfat: L said she’d had better on previous occasions. Her parents fared better with a pie, gravy and chips that they said was great (and certainly looked fantastic). I’d definitely go back, though – a good range of options, really friendly staff (who were great about my nut allergy) and it’s a lovely space – no wonder it gets so busy.

The gig was in Cluny 1 again – the same place I saw Rob Heron. My only knowledge of the band was that they did the Justified theme, but their hard-to-quantify sound – an engaging mix of bluegrass and hip hop – and their fantastic stage presence made for a great gig, and I’m really pleased L suggested it – part of what I wanted to do when I moved was broaden my horizons, and do more than just go to the theatre all the time, and I’m actually doing pretty well on that. I’ll never be as cool as her folks, though… 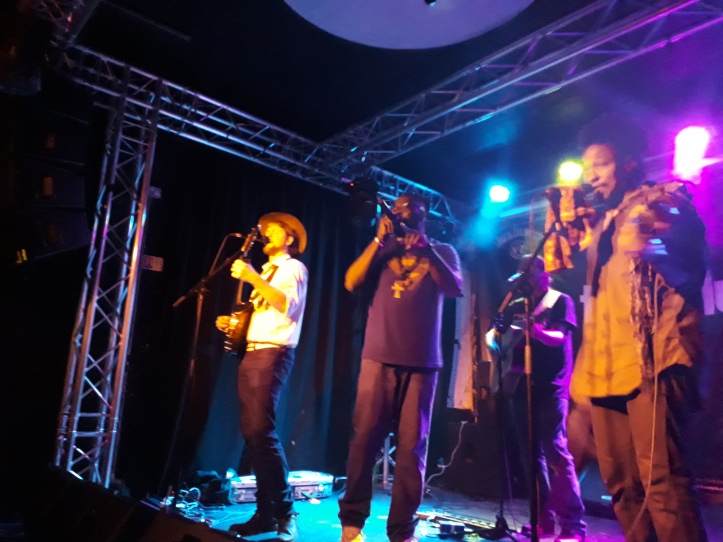