I have blogged about Fenwick’s Food Hall before, and though I sometimes miss what it was before its super fancy revamp, it remains a parlour of delights. So I should have known I was taking if not my life at least my wallet in my hands when I decided to, ahem, ‘take a short cut’ through only to discover they were running a Meet the Makers event, where you could try the wares of some of the usual stockists – most of whom were local – and meet the people behind the labels. Well, I had to, didn’t I? For research.

Drawn by the gorgeous packaging, I have been tempted by North Chocolates before. A local brand of small batch gourmet chocolate, made in Newcastle upon Tyne, all of their bars are gluten-free, vegetarian (many vegan) and the cocoa and cocoa butter used are sustainable and ethically sourced. The prices would match what you would expect from that kind of brand – around a fiver a bar – and they do a gorgeously packaged range called Icons, decorated with illustrations of some of the North East’s most recognisable images.

I got chatting to Bev Stephenson, who runs the company, and had a taste of the Milk with Smoked Salt, which I ended up buying, telling myself it’ll make a lovely gift for someone when, let’s be honest, it’ll end up being a gift for Future Me. You can buy the range in Fenwick’s Food Hall, and get more details here.

(Cyberman Angel from the Love of the North, in the Stack or Whitley Bay).

The Winery by Laneberg Wine

Next up was The Winery, where I spoke to Nick Lane, half of the team that run what is billed as Tyneside’s First Urban Winery (his wife Elise being the other half). I tried three of their 2018 wines: a pleasantly dry rose, and two whites: Solaris, an off-dry that was nice but less to my tastes than the Bacchus – which just won a Bronze award in its category, so I’m not alone in my praise. The bottles retail at what you’d expect for an English wine – about the 16-19 quid mark – so unless you are richer than me you won’t be buying them to neck after a bad day at work, but for a more grown up soiree, they would be a nice choice. The rose, especially, might convert those who think of rose as a cringingly sweet drink.

Next on my rounds was Peter at the Northumberland Gin company, who offered me a taste of Hexham gin. A nice, dry drink that was pleasant on its own (with a smattering of lemon peel) or with tonic, he also pointed out that those who like sweeter drinks can mix it to Fentiman’s Rose Lemonade to get a pink gin drink that tastes surprisingly like Turkish delight! Retailing at around 30 quid* a bottle – a bargain for small batch gin – this is definitely on my list for next time my gin loving friend T comes to town. (*ish. By this stage, I was starting to blur on prices).

Also on the gin front, was this Edinburgh-based company which specialises in botanical gins which change colour as you add the tonic! I tried the Rose gin, which was nice but sweeter than I like my spirits, and the Lavender and Echinacea, which was more my speed, and which went from purple to a light pink when the tonic was added. As well as being sold in Fenwick’s, they run a mail order club (now there’s a subscription box I could get behind) and do lovely gift boxes if you are not sure which flavour to choose.

I’m not much of a soft drinks fan anymore – water, coffee or booze is my sacred trifecta – but I’d tasted so much alcohol by this stage I thought a soft drink was a good idea, so stopped off for a try of local cola makers, 40 Kola – two North East lads by the name of Kieran and Dan. A grown up, sophisticated take on cola, this is definitely worth trying. It’s less sweet than commercial brands, but without that ‘glass-of-wet-dirt-with-an-aftertaste-of-worthiness’ that plagues many of the smaller outfits. It’s not something I would personally drink a lot of, but I can imagine a cold glass on a warm day going down very nicely indeed…

The woman at this stand was so lovely I felt bad for not trying it, but I can’t stand the taste of tea. If you don’t share my unBritish aversion, they do a range of drinks that look great.

I didn’t get a chance to try this or really talk to the guy manning the stall, but they do win props for their impressive stand, the gin is made in Alnwick and the bottle is certainly pretty so would make a good gift. 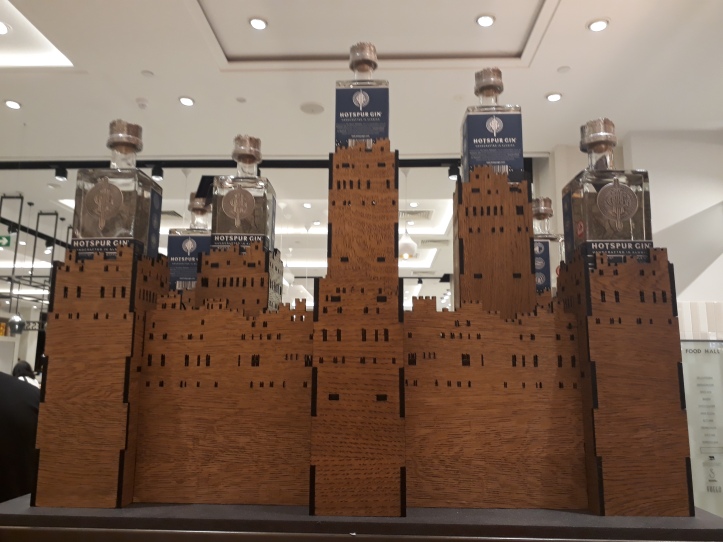 I didn’t think to get a picture of these, but worth including because they do a range of drinks that are available with or without alcohol, so would be perfect for a party where you don’t want your non-drinking friends to feel left out.

All of the above are generally available in Fenwick’s – so why not give some smaller makers your support? And a huge thanks to all the makers who took time to talk about their products with me today!

Like how I write about Newcastle? Why don’t you check out my book.

You can also support my writing by buying me a Kofi. Or hiring me to write stuff. Either’s good.